Are you looking for some inspiration on how to teach photography to your students? Or, perhaps your child has shown an interest in photography and you are wondering what you should do next, right? Well you have come to the right place. It can be quite overwhelming to begin with, and there are so many expensive cameras and pieces of equipment around these days, as well as many different ways to kick of this teaching journey.

This post will hopefully give you a few helpful tips and tricks to let you set a course for the future, as either a parent or teacher.

Remember when you were a kid and you were sure you were going to be the next famous drummer in a rock band? Your parents probably bought you some of those small rubber drumming mats, and a pair of sticks, instead of a full size drum kit. A week later, you were over it already. Luckily for your parents, they didn’t spend a few thousand dollars getting you that kit.

What does that have to do with photography, you ask? Well, the same principle applies here. Your child may be completely sincere in the moment in telling you he or she is very interested in photography, but things happen.

There is no need to start off with a camera that costs thousands of dollars, or with fancy equipment that even some professionals wouldn’t know what to do with, because there is always that chance that your child will wake up one morning with no desire to ever shoot another photograph. And for the teachers out there, we know your budget isn’t as big as you’d like, so you most likely have no option than to look on the cheaper side.

Depending on which grade of elementary school you are teaching, some or a lot of your students may already have a smartphone. There will obviously be too many elementary students who do not have a smartphone though, as this is still such a young age, so you’ll have to accommodate them somehow.

This could mean that students pair up, or form even larger groups, in order to share a device between them. Or, if that doesn’t sound reasonable for whatever reason, due to a lack of phones or otherwise, you may need to bring in a bunch of fairly cheap point and shoot or DSLR cameras.

There are resources you can tap in to in certain areas that may allow you to borrow a set of photography equipment for use in an educational setting, but this obviously varies so much depending on your area so you will need to hunt them down yourself.

The Basics Can Be Learned on Any Device

No matter how good or bad the camera is, it should be enough for a beginner to learn the basics on. The quality and resolution of the picture itself may not be amazing, but that is not something that is a necessity right now for the learning process. 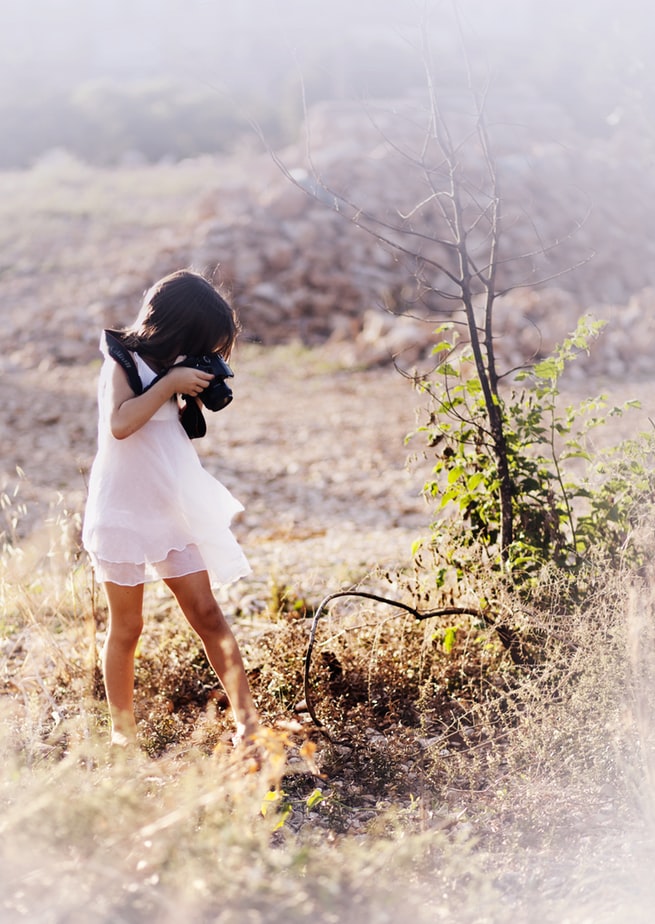 For a start, one of the main problems that beginner photographers run in to is blurry photos which are often caused by an unsteady camera. Through trial and error, a young photographer will learn how to steady their mind, body, arms, and hands in order to take a crystal clear photograph.

A tripod could obviously help with this aspect of photography, and you can find fairly cheap ones, but this is not required as of yet. Before you get to the tripod stage, teach the children to steady themselves both physically and mentally. If they are too excited, they will make erratic movements, so make sure they’re calm. Some teachers and parents even start with a short meditation session. In terms of physical stability, teach them to lean their arms or elbows against a wall, ledge, or other structure.

Most modern point and shoot cameras have an “auto” mode, which attempts to simplify the photography process and allow the photographer to think more about the subject and less about the equipment. This can be both good and bad.

The good part is that a beginner photographer will be able to shoot better photos sooner than they would have otherwise, because they don’t have to learn and experiment with all of the camera’s features. This can cut out a lot of frustration that children may experience from having their photos turn out poorly.

The bad part is that a beginner photographer may never become a good photographer if they don’t take it off automatic mode and start manually setting the functions of their camera.

So, think of the auto mode on a camera a little bit like training wheels on a bike. It’s fine for a while, but you’re not going to be winning any races that way. Obviously the harm in taking a poor photo is much less than the harm in falling off a bike, so consider introducing the manual settings of the camera sooner than later.

You can just select a few settings each time to talk about, so that it doesn’t become too overwhelming with photography jargon. For example, take some time to teach about aperture, let them play around with that setting for a while as they take photos, and then move on to another setting next time.

Bring the Camera With You

Remove all “parent” stuff from this, make it about field trips, even throughout the halls and outdoor areas of the school itself, having students bring in regular everyday items as a challenge to find out how “boring” things can still make an interesting photograph…

During this early learning stage, children should be taking a lot of photographs. It’s all about practice, practice, practice. Back when film was the only option for photography, it would be quite expensive to allow a child to run wild taking hundreds or even thousands of photos, but with digital this is no longer a problem.

You could make special trips with your class to take photos at particularly scenic or interesting places, but you don’t have to. Good photos can be taken just about anywhere. Bring the cameras for a walk through the halls of the school, or some of the outdoor areas, and just see what happens. Photography isn’t all about getting that majestic shot of the Eiffel Tower – sometimes it’s just about appreciating a more natural beauty, or a fleeting moment in time that you have now captured.

Another interesting challenge that you may want to present to your class is to have them bring in some kind of regular everyday object for the class to take photos of. One student may bring in a hat, another brings some kind of toy, and so it goes. This can be used to show children that even a bland object that doesn’t seem like much to look at can be turned in to a great photo.

All of the above should provide a good starting point for you and your kids or students. One last piece of advice would be to teach children early on about how to safely handle this expensive piece of equipment in order to prevent damage.